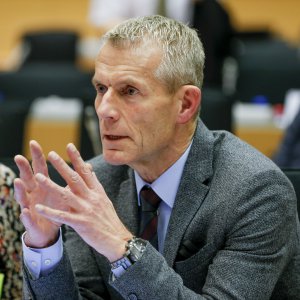 GUE/NGL MEPs Lola Sánchez Caldentey (Spain), Anne-Marie Mineur (The Netherlands) and Helmut Scholz (Germany) are pushing for a binding treaty on transnational corporations and human rights at a UN meeting in Geneva today.

The treaty is already in the early stages of development by the United Nations Human Rights Council and has the potential to dramatically improve respect for human rights in the supply chains of transnational corporations.

By contrast to the UN's existing voluntary guidelines on business and human rights, the treaty would be binding and make big companies accountable for human rights abuses in their supply chains under international law.

The UN’s working group on the treaty is meeting in Geneva this week to define the treaty’s scope, obligations for transnational corporations and enforcement mechanisms.

So far, however, EU member states on the United Nations Human Rights Council have shown minimal support for a binding treaty and referred to the voluntary guidelines.

GUE/NGL MEPs are in Geneva today calling on those EU member states and other countries to support a binding treaty.

The MEPs have also launched an Inter-parliamentary Initiative calling on parliamentarians around the world to show their support for a binding treaty to add pressure to those on the Human Rights Council who have the power to decide.

The MEPs joined parliamentarians from around the world for the World Parliamentary Forum meeting on the binding treaty on Sunday.

Spanish MEP, Lola Sánchez Caldentey, explains: "The only reason why some governments have been able to show a non-cooperative attitude in previous working sessions is because not enough people knew about the binding treaty; because they didn't feel the pressure of the people.”

"That has already changed. We have come to Geneva with a call from 250 parliamentarians from over 20 countries in support of the binding treaty; and the support for this treaty is still growing.

"From my experience, every single person who hears about this process automatically becomes a supporter of this much-needed binding treaty.”

Dutch MEP, Anne-Marie Mineur, adds : "In a world where corporate interests are very well catered for, the UN binding treaty that will be negotiated in the coming days provides a counterbalance by guaranteeing that human rights are given priority in business.”

"I sincerely hope that the voice of European governments will play a positive role in this debate. Too many people are suffering human rights violations, without access to remedy.”

More information about the treaty and the role of the EU

The MEPs will speak in a press conference on the state of play and expected future developments of the treaty this morning in Geneva.