Despite a recent European Court of Justice opinion condemning the collection and sharing of air passengers’ data, the European Parliament is now set to pass a new Entry/Exit System for third country nationals that will lead to more mass data collection as well as deportations.

Marie-Christine Vergiat, responded this morning: “This new system entrusts the management of borders to digital filing systems that collect more and more data as well as fingerprints and facial images.”

Vergiat explained that the texts of the reports debated in Parliament today “were originally intended to facilitate border crossing for the 50 million third-country nationals who come to the EU each year. However, this is now primarily a system for identifying people in irregular immigration situations and facilitating deportations."

“Under the false pretense of security, Europe is multiplying repressive forces’ access to sensitive data, including in cooperation with third countries like Sudan.

“Europe is turning into a bunker, undermining its own values and picking scapegoats for its problems rather than fulfilling our international responsibilities,” added the French MEP.

“Following that, it’s unacceptable that we now establish this European Entry/Exit System. This is not compatible with the Charter of Fundamental Rights.

“We as the GUE/NGL are against this form of mass data retention from travellers. This will cost millions of euros and it is a shame for the European Union," concluded the German MEP. 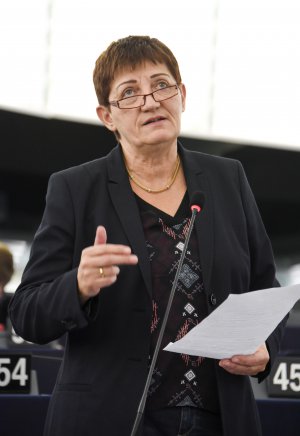