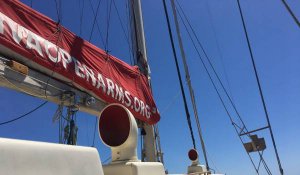 Two Left MEPs travelling with a humanitarian boat carrying refugees and migrants to safety in Europe have been speaking after arriving in Barcelona.

The ‘Open Arms’ - which was carrying 59 migrants and refugees who had been rescued off the Libyan coast on 30th June - and the observation vessel ‘Astral’ docked at 11h00 today in the port city.

The ships were run by Proactiva Open Arms, a Spanish NGO devoted to search and rescue at sea. The two boats had previously been refused entry into both Italian and Maltese waters - in contravention of the international Law of the Sea and the fundamental human rights of 59 people.

The refugees’ plight on board the ‘Open Arms’ coincided with the EU Council summit last week on migration, and its failure to come up with concrete measures to tackle the crisis - in particular, the refusal by the hard-line Italian government to come to any compromises.

The missions also took place as the Italian authorities’ recent actions to seize and criminalise crews for rescuing migrants was debated at the European Parliament on Tuesday evening.

Speaking from Barcelona, Miguel Urbán (Podemos, Spain) and Eleonora Forenza (L'Altra Europa con Tsipras, Italy) have expressed their outrage of what they have witnessed, and the failure of the EU to act humanely in this crisis.

“We observed Open Arms’ rescue work, which is enduring a shameful criminalisation process like other NGOs.”

“During this mission - which took place during the EU Council summit on migration - we have witnessed the failure of the EU’s migration policies and the Italian government’s disgraceful closure of the ports.”

“Similarly, it is outrageous that European Parliament’s resolution on reform the Dublin regulation have been ignored by the Council,” she said.

“We are demonstrating that Fortress Europe exists alongside a Europe of refuge and welcome, which has its fullest expression in sanctuary cities and in cities of change, such as Barcelona.”

“The EU's migration policies have direct consequences: death. Recently, 1,000 people have drowned in the Mediterranean. In the last four days, 500 people have died. This are also direct consequences to the placing of obstacles in the way of NGOs that carry out humanitarian rescue work. Right now, no NGO boats are operating in the Mediterranean. This translates directly into deaths.”

“The people who arrived today in Barcelona could have died. Despite harassment and criminalisation, it is thanks to NGOs such as Proactiva Open Arms that they are alive. Leaving the rescue work to Libyan paramilitaries is not only ineffective and irresponsible, but it leads to death and blood stains on our hands,” he concluded.