Our fight goes on! 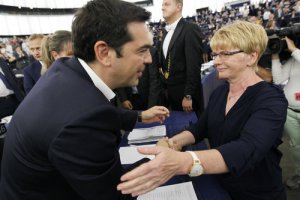 Gabi Zimmer, President of the GUE/NGL group in the European Parliament, declared today:

"Yesterday the Bundestag decided to support the agreement by the Eurogroup concerning the 3rd so-called aid package to Greece. The consequences for the Greek people and their economy will be hard.

Our fight goes on. Greece was only the starting point for the neoliberal programmes against social justice and democracy.  Schäuble and others lost their political power game when they tried to push Greece out of the Euro. A “Grexit” would have been a catastrophe, especially for poor people - and not only in Greece. But the EU is still far from respect and solidarity between member states.

We should now help the people in Greece with three concrete measures for growth instead of further austerity. First, the massive debt needs a real haircut in order to make it sustainable. Second, EU countries like Germany who profited from the crisis in the Eurozone, and especially in Greece, should transfer these profits into a fund for sustainable investment in Greece. Third, the German government must now reconsider its position towards the outstanding war reparations to Greece.

The Greek government with Alexis Tsipras needs our full support by to broaden the space for the next negotiations to restructure the Greek debt and to promote essential social reforms. We will support the mobilisation of European peoples and movements to reinforce our "OXI” to austerity policy, to blackmailing democratic governments, and to the destruction of European values.

For this we need a strong European left alternative. We have to be united to defend peoples’ rights to a decent life. We need a united Syriza with a strong link to the solidarity movements in Greece and in Europe!"