Zimmer: Something is changing in the S&D 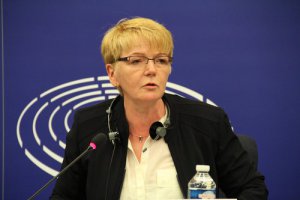 Jeremy Corbyn's ascension to the leadership of the UK’s Labour Party is a sign that something hopeful is happening in the Socialists & Democrats, Gabriele Zimmer said in an interview with EurActiv Greece.

Gabriele Zimmer is the President of GUE/NGL in the European Parliament. She spoke to Sarantis Michalopoulos.

The latest bailout deal reached between Athens and its international creditors resulted in SYRIZA’s breakup. Another leftist party emerged after the referendum in Greece, whose members are still opposing austerity measures. What is your opinion about the Popular Unity party, led by Panagiotis Lafazanis?

The neoliberal elites in Europe pursued a clear goal: to get rid of SYRIZA as the only left government in the EU that challenges the neoliberal EU of banks and corporations. We work together with every left party which fights against this logic and struggles for a social EU to the benefit of a majority of people.

Many claim that Syriza fought and lost the battle against the European conservative powers. How can the European left still convince EU voters that another Europe is possible?

Having a look at the European political landscape, one sees that the current balance of power was totally against SYRIZA. Nevertheless, they started a courageous struggle for democracy, popular sovereignty, dignity and prosperity for everybody in Europe. Independently of the outcome of the negotiations, many people realized now how the ruling elites, especially within the informal Eurogroup, do not even shrink from blackmailing a whole country and suspending democracy in order to keep their power and privileges.

SYRIZA made people all over the EU start debating the democratic deficiencies of the EU, the power of banks, and their political representatives, and that different approaches to this EU exist. Voters are smart enough to understand that a political shift needs a change of the balance of powers. It is up to us to mobilise and convince voters, and up to the people to push for this change from the bottom in order to challenge the old elites. Elections in Spain, Portugal and Ireland can be the next steps in this long-term struggle.

There are SYRIZA lawmakers who publicly claim that the party should become the next Socialist pole in Greece. Are you afraid of losing Tsipras?

No, not at all. Alexis Tsipras has been fighting for left ideas and policies for many years. He struggles for social justice, a fair distribution of wealth and the burdens caused by the crisis of the banking and financial sector, and a restructuring of the unsustainable debt in Greece and many European countries. Furthermore, he tries to combat the humanitarian crisis and fights against the corruption of the old Greek elite. This is totally against the ruling neoliberal dogma to which most of the social democratic parties in the EU stick to. And many social democratic parties in many EU countries are part of this ruling nepotistic elite. I do not see at all how SYRIZA could become part of their political family.

Are you optimistic about Podemos' performance in Spanish elections? According to polls, it seems its popularity has been dropping.

Yes, of course, I am optimistic. Podemos was founded just one and a half years ago and was able to mobilise hundreds of thousands of people in Spain and in Europe against the failed austerity dictate and the unfair crisis policies imposed by the ruling elites. It had existed for just four months, and they reached more than 8 percent in the European elections. Now, depending on the surveys, they could be able to, at least, double this result in the upcoming national elections. For such a young formation, this would be a very good result. They will be an important and urgently needed political force which pushes for social justice, fights corruption, and brings back democracy to the nepotistic political system in Spain. Let’s also not forget that there are other left, alternative, and progressive forces in Spain. By building alliances, they could start changing the current balance of power together.

What does the election of leftist Jeremy Corbyn mean for your political family? That the S&D comes closer to the European left, or vice versa?

First of all, we are happy that a left politician was able to gather a majority against the neoliberal faction in the tradition of Tony Blair. In the first place, this is a good signal for many workers, poor, or unemployed people in the UK, as the Labour Party could again start to defend their rights and interests. But “one swallow does not make a summer” and Mr Corbyn will have to struggle hard for his approach and against internal and external opponents and campaigns. Labour is only one party inside S&D, and it will be a long way to bring them closer to our policies, values and principles. Nevertheless, something is changing in the social democratic family, in a hopeful direction.